Casanova - The Story of my Escape

A few years ago now I translated Casanova's account of his own escape from the Leads prison in Venice in 1756. In the 18th Century, the book was a huge hit throughout Europe, but was never published in English (Later, I gather that Arthur Machen translated the work, but this does not seem to have been widely available).

Clocking in at around 60,000 words, the book is a blend of action, suspense and philosophy, as Giacomo Casanova battles loneliness, depression, disease, madness, and the four walls of his prison cell high in the Doge's Palace in St Mark's Square. Simply, it has bestseller written all over it, and I can't understand why it's been snubbed by anglophone publishers for so long.

My translation was considered seriously by two publishers, who I shall not name here. One eventually turned it down as it didn't quite fit their range or schedule. Another offered me a contract, from which I walked away, which turned out to be a very wise move by all accounts.

Now I'm preparing to publish this work on Kindle, with a paperback edition to follow if it should prove successful. Just one problem: the cover.

As the work feels so modern in many ways, I decided early on that I wanted a photographic cover, and of course I have no budget to visit Venice and snap Casanova's cell myself, or to set up a shoot with a model, costume and appropriate set. Friends and family have offered me holiday photos of St Mark's Square, and some of the photos are really good - it's just that the Doge's Palace looks bloody horrible in pictures, to be honest. Given that it's in, you know, Venice, it's a nasty squat oblong of a building. And everyone was suggesting Canaletto, but then we're drifting from the point that it's not really a book about Venice, it's about a guy locked in a lead-lined cell. Casanova touches on many subjects in his writing, but it never stops being about him.

And then last night I had an interesting thought... This is a contemporary portrait of Casanova: And this is yours truly, playing Mr Puff in a charity production of Richard Brinsley Sheridan's The Critic last Summer:

It's not going to win any awards for historical accuracy, of course, but I think we have a suspect...
Posted by Unknown at 01:51 2 comments: 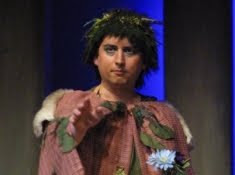